The Amerindians just like the Afro-Barbadians have suffered a demise by the hands of the colonialist regime. Their history on this island too was told by the captors who also sought to render their place to this island as mute.

Let’s recap from last week’s episode. We’re looking at Bajans who should replace Nelson de Green Man in town. There’s a criteria given on how we should look at it and I promised some suggestions, here’s my next one. Lemme state this, this next suggestion should indicate that people or movements and not just individuals should be honored. Read on and you’ll see why I say so. 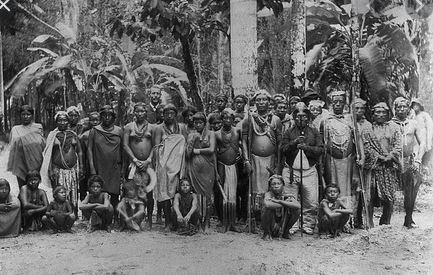 The Amerindians just like the Afro-Barbadians have suffered a demise by the hands of the colonialist regime. Their history on this island too was told by the captors who also sought to render their place to this island as mute. For many centuries, the English tried to take credit for “discovering” this island when in fact, the Amerindians inhabited the island for 1100 years. That’s four cultural periods and longer than the Afro-Barbadian society. The English came 3000 years after the Amerindians. The inhabitants suffered genocide due to the Spanish.

The Amerindians, made up of several tribes, were incorrectly called Arawaks and Caribs by the Spanish. Some historians and cultural theorists will argue that these words are derogatory. The Kalinagos visited the island even during the settlement of the English colonizers.

These early inhabitants obviously would have been the first to create a culture on this island and bestowed it with a name , Ichirouganiam (Ichi-Rooga-Nah-Yeem). ICHI – Stone, IRO(U) – Red, GA – Bite, NA – Island, AI-M – Teeth Outside. There were many theories devised why they gave it this name. One of the theories being the place of red painted stone using fierce people who had better be left alone. Teeth outside, was interpreted as the coral reef that surrounds the island.

There was more of a controversy around the name Barbados, these theories included:

After ‘handing off’ the island to the English, they kept the name but incorporated it into their language, thus Barbados as we know it.

To be Barbadosed was added to the lexicon, meaning a punishment worse than death. A punishment handed down to indentured servants.

In 1627, the Island was finally to be colonised. Among the captured for this experiment included Indians from the Essequibo Coast and Africans from the Cape Verde Islands. The Amerindians assisted through cultivation of the land. The Holetown Festival commemorates this landing by acknowledging the English settlers.

For most of our education about the Amerindians, we were given partial to half truths and the viewpoints of descendants of the English. The Amerindians inhabited this space as the first true Barbadians for some 3000 years. They created a culture and heritage that is barely remembered or spoken about. Although they have lived here longer than any other racial group but is only seen as a mere footnote in this country’s history shows another unfortunate sign of colonisation. As the first Barbadians, it would be very remiss of me to not suggest an honor for these people.

“Everybody Hates Kupa” is a weekly column written by Matthew ‘Kupakwashe’ Murrell.

Since When African Ancestry Is Witchcraft?!

“Safe Zone” vs. Sovereignty?
A Day in the Life of COVID 2021
Comment