Let’s recap from last week’s episode. We’re looking at Bajans who should replace Nelson de Green Man in town. There’s a criteria given on how we should look at it and I promised some suggestions, here’s my next one.

The Barbados Landship is one of the longest cultural institutions we have. Its origins date back as far as 1863 and has been a part of the working class community. The cultural institution has been battled with many struggles from harsh criticisms of mockery to financial instability and to its relevance to stay active and alive. The Barbados Landship more than any cultural movement in this country represents the ideology of creolisation. It is the ultimate representation of a post colonial Barbadian dealing with notions of identity traversing through a space designed by colonialism through an African body. To rid of a maritime criminal and his culture of white supremacy, to replace him with an indigenous maritime on land entity would be better. I’m aware there is a monument for the Landship outside the The Steel Shed in Queen’s Park, but a statue in commemoration would be better to me.

From 1898-1912 as many as 19 Landship Societies were recorded as friendly societies in Barbados. Every parish had a local chapter to which the society was named after a British Naval ship. Some of these Landship societies served as “susus” or meeting turns. The funds acquired would be to assist for funerals or sick relief. Just like any military organisation, the Landship functioned with hierarchy and ranking status among its members such as Captain, Commander, Drill Master etc. The discipline and structure is of high importance and helped create unique African inspired marching routines and theatrical choreography. This is the charm of its masquerade, poor black Barbadians holding prestigious titles. 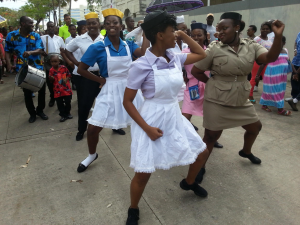 The activities and dress code of the Landship were faced over the years with derision. Many saw the Landship as an embarrassing homage to a colonial artifact. A crude example of keeping the title of ‘Little England’. However, it is quite normal for the colonised to synthesize its own culture with its oppressors. Along with its inspired African dance movements like the popular ‘wangle lo’, it is also coupled by musical instruments like penny whistle and drums. Drumming was outlawed during slavery as a means of spirituality, clearly not a colonial instrument. The uniforms are close in replica to British naval uniforms but the emblems, stripes and other details are only unique to the Landship. The Maypole, as a part of the performance, has roots in Africa as well as Europe. Synthesizing cultures is nothing too new to the Caribbean space. The patterns of a cultural mix exist oftentimes for the survival of its African component.

The various Landships took part in numerous national celebrations like Independence Day, Crop Over and as an attraction in hotels. By the 1970s each ‘ship’ began to sink due to lack of members and funding. By the 80s, the remaining ships came under a united umbrella that we know today as ‘The Barbados Landship’.

Despite its depleting numbers, the Barbados Landship is nowhere leaving the psyche of the Barbadian culture community as it is a part of an African Caribbean dance legacy. Using an African system of economics by poor black Barbadians whilst being one of the longest cultural forms in the existence of the emancipated Barbadian is quite a legacy. Replacing the green man with the ‘ship that doesn’t leave the land’ would be great irony. Black bodies moving in ways to make their colonisers shiver, I love it. A monument for the legacy of the Landship would be a great honor to the culture of being a Bajan.

Well, there you have it. 6 amazing suggestions to replace the green man, if I do say so myself. When I asked people who they thought, some did give me names I did agree with, some said they don’t care as long as de green man is gone. Hopefully this is the year or moment we finally did it right and our government stands on the right side of history. No more back pedaling or sunken place antics. No more catering to the white bourgeois class that dominates the tourism and service industry with their blatant racism and mistreatment of black bodies. If they see Nelson as a hero and you cater to them, you have failed the names on this list, our national heroes and every unsung and nameless hero who fought and died for your right to sit where you are. Our governments have all needed to decolonise and stop acting like they can’t manage a country and replace a statue at the same time. White supremacy still lives in this country and takes forms in institutionalize and systemic racism, which forms sexism, classicism, homophobia, transphobia and xenophobia, they are not separate entities of each other, they are rooted from the tree of colonialisation. It fed us hatred of colourism, poverty, police brutality, political corruption and all forms of sexual crimes. We were given a system designed for us to fail, and even if some of us manage to survive, how exactly free are we if we continue the cycle of oppression? Not in a 90% plus black country should we have a statue that reflects all of that when we could do so much better. Our ancestors burnt an effigy every year to the bad and hard times in hope for a new year to bring better. It was a simple gesture and things did progress since the first burning…Burn Mr. Nelson down.

“Everybody Hates Kupa” is a weekly column written by Matthew ‘Kupakwashe’ Murrell.

Since When African Ancestry Is Witchcraft?!

Embodying The Sacred: AfriKan Spirituality in Barbados 
How To Choose Who Should Replace Nelson Part VI
Comment